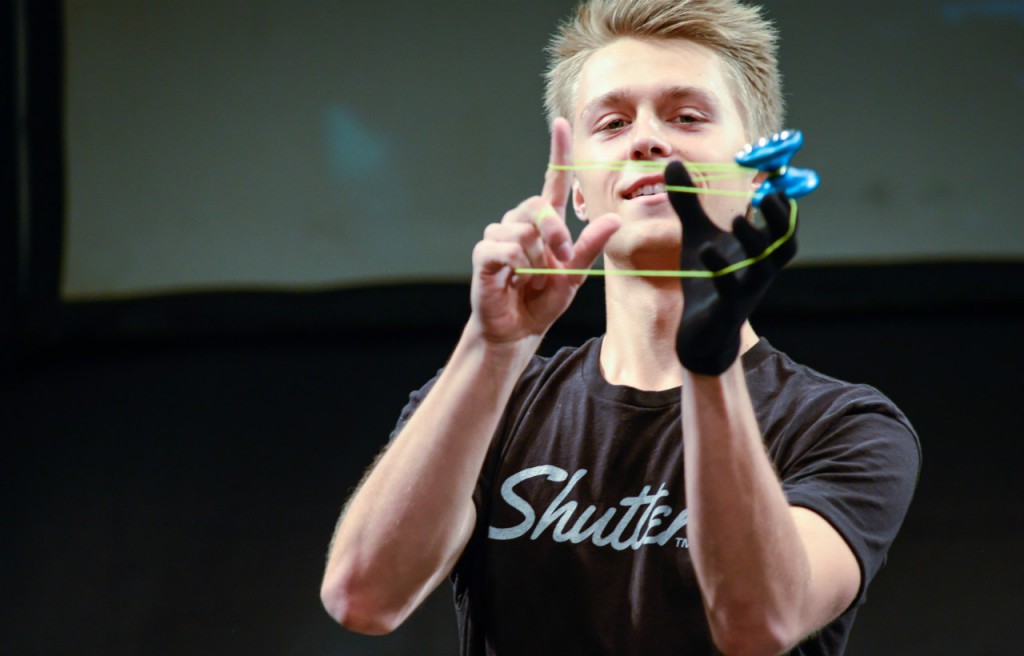 I started playing yo-yo when I was 8 years old.

I visited the National Y-Yo Museum in Chico, California one day and saw people playing. From that point I knew it was something I wanted to do. The first yo-yo I practiced with was a purple YoYoFactory FAST 201.

John Ando:
He is an extremely innovative and stylistic player. I respect that he has accomplished so much in the 1A, 2A and AP divisions. His tricks have a different focus than most players, and he is a brilliant mind when it comes to freestyle construction. John helped me tremendously with my freestyle from last year, and has also helped me this year in coming up with ideas for the freestyle that I never would have imagined. I think SHAQLER (Ando and the rest of his team) put on the best performance yo-yoing has ever seen in the 2010 Worlds AP division. I am so excited to see what Ando and SHAQLER bring to the stage this year.

Rei Iwakura:
Rei should be included in everyone’s favorite players list. Last year I spent a month in Japan and was lucky to have multiple opportunities to practice with Rei. This was the first time I saw his yo-yoing up close in person. Of course I had seen him on videos and on stage at Worlds in the past, but watching him yo-yo up close in person was truly magical. I have never seen a player with so much cleanliness and overall control of the yo-yo. With these attributes, along with his talent in performing, he is a pleasure to watch every time he gets on stage.

Shu Takada:
If you have ever watched one of Shu Takada’s freestyles, then you know why he is one of my favorite players. In my opinion, Shu brings more innovation to the stage than any other yo-yo player. Where Shu gains so much of my respect isn’t just in his trick innovation, but more so his performance innovation. I spent a few days hanging out with Shu in Japan last year, and whenever we spoke of yo-yo, we spoke of performance in freestyle; not tricks. You know how you can watch a movie for the second or third time, and notice something new each time? This also happens with Shu’s freestyles. Go watch one now and you will see what I mean.

Q4. What made you choose 1A as your main style?

In my first competition, I competed in the 1A division. From that point, It has been a constant journey of improvement. I am always striving to improve in 1A, and I believe there is not room to spend time with another division right now If I want to continue to reach my current goals.

I usually practice randomly throughout my day, by myself or with US National 4A champion Zac Rubino. The practice consists of making new tricks and yo-yoing to new music.

Q6. How does that change when you are preparing for different types of contests?

Q7. What is the best part of yo-yoing, in your opinion?

In my opinion, the best part of yo-yoing is its mixture of creativity and competition. I love both of these things, and I think when they are mixed, I thrive.

Q8. Do you have any good stories from before you became a world champion that you want to share with us?

In 2013, I didn’t pass to finals at the World Yo-Yo Contest. I was extremely upset with this situation, but I eventually came to the conclusion that it needed to happen. Not passing to finals in 2013 shined a light on my ignorance. It allowed me to realize what was wrong with my yo-yoing and my mindset. It allowed me to reflect on what I do, and was the first step in a better understanding. I believe that this experience allowed me to become World Champion.

Q9. How did you feel when you became a world champion?

It felt unreal. I had to watch a video of the results in order to feel like it truly happened. The whole day just felt right, even before I stepped on stage.

Q10. Is there anything that changed for you after becoming a world champion?

I have gotten a lot more opportunities to travel. Since becoming World Champion, I have performed in China, Hong Kong, Malaysia, Singapore, Vietnam, Japan, and Spain. I did work very hard to earn these opportunities, but I know I am also very lucky to have received them.

Q11. How do you feel going into this year’s World Yo-Yo Contest?

I feel very confident with my freestyle. I am bringing something to the table at a level nobody has seen before.
I am looking forward to the event as a whole, along with all of the amazing freestyles I know will be performed.

Many thanks to Gentry Stein! We wish him the best of luck at WYYC2015.