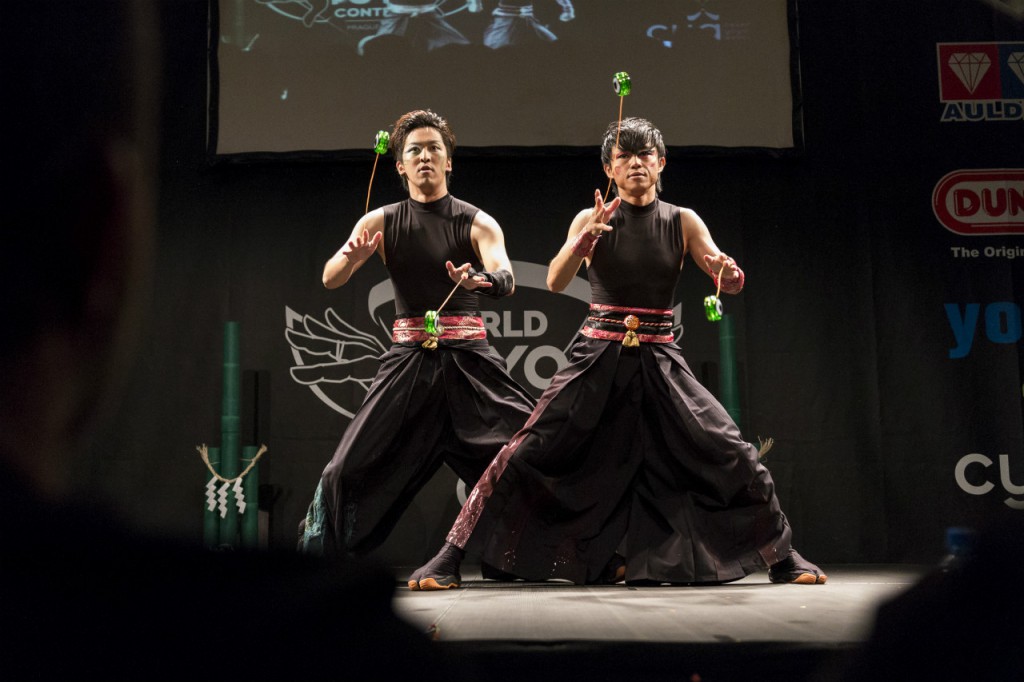 S: I don’t remember well, but probably around the spring of 1997.

T: A manga called “Moero Spinner” [something like “Burn up Spinner” in English] was being published in Coro Coro Comic magazine and I saw it and thought it was “Cool!”

S: For some reason or another, I picked up a yo-yo from the display on the right-hand side near the entrance of a toy store. That was the beginning.

T: Yu Kawada – He was the reason the AP Division was established, and he is the only one I will go to for an opinion about my yo-yo performance [and vice versa].
Hironori Mii – He was the person who got me to participate in the World Contest [for the first time] and I wouldn’t be who I am now without him.
Hiroyuki Suzuki – Even while the younger generation keeps moving up, he’s still fighting at the top, and the cleanness of his tricks is on another level.
Takuma Yamamoto & Tsubasa Onishi – I watch their freestyles and think they’re really incredible. Their attitude is like an athlete’s.

S: TOMMY – There is no one who surpasses his ability to express with a yo-yo.
Hiroyuki Suzuki, Kengo Kido, Atsushi Yamada – As well as being yo-yo players, they all have started their own brands and stand out as leaders [in the yo-yo world].

Q4. What made you two come together to form SPINATION?

T: In 2012 I was planning a performance project and I invited Yu and we performed together. After that [we realized] we are both World Champions and are both mainstays of the AP Division! If we join forces we can’t lose!! Then, not only just at Worlds, we started doing real theater and other performances [together].

S: I hadn’t entered the World Contest since 2006, but I began to have some strong feelings about the AP Division itself. The feeling of wanting to enter the AP Division began to overflow [in me]. However, I also felt like there was a limit to what I could accomplish as a solo act.
In my thinking, the power of expression and the number of things one can do can increase with the number of people participating. I came to the conclusion that for yo-yo and the AP Division to get on the same level as other entertainment fields, it was necessary to form a team of high level players and make an attempt at something bigger.
It was there that [I decided] to join up with TOMMY, someone who had been away from the yo-yo world for a while and was working as a professional in the entertainment world, but who had the same high level of thinking [about AP as I did]. SPINATION was formed with the goal of broadening the possibilities of yo-yo and moving closer to first-class entertainment.

Q5. Usually, what kind of performance activity do you do as SPINATION?

T: For the most part, our main focus is on domestic street performance festivals. We also do performances at other types of events. From now on we are also proactively working toward developing theater stage shows.

Q6. I would imagine that there might be some difficulties with practicing together. Can you tell us about some of your experiences?

T: The most difficult thing is that our practice time together is very limited. We are based in Aichi [Prefecture] and Tokyo so it is fairly hard for the two of us to make enough time. In order to practice together, one of us has to travel to where the other is, so the journey itself is rough. Haha…

S: Creating a performance that both of us can be satisfied with is difficult. Together, we have a strong mutual understanding so things often go smoothly, however we don’t always agree on things like choreography, tricks used, or the direction [of an idea]. Thus, doing something new is a difficult process, but we do our best to have confidence in performing each [show] we have produced.

Q7. Do you have any good stories from last year, before you became world champions, that you want to share with us?

T: First of all, last year we had a fairly hard time deciding on our music. We had decided the theme and image [we were going for] first, but neither of us came across the right music and practicing [under those circumstances] was rough… We practiced hard like that for three weeks, but at the end both of us thought,”We can’t win with this so let’s scrap the whole thing.” Haha…
The biggest episode of all was Yu’s sudden health collapse the day before our AP Final performance. We still don’t know the cause, but he experienced more than 24 hours of horrible gastrointestinal issues and was completely unable to eat or drink. He was in no condition to be performing. The night before we were seriously considering withdrawing from the competition. Yu falling down at the end of our freestyle video is real evidence that he had reached his limit in more ways than one.

S: That’s right. I fell totally ill right before our performance. It was the first time in my life that even just standing was painful. Your body is an investment, so it’s really important to take care of yourself, especially when you are in a foreign country. Everyone, please take care! With water and raw foods especially.

Q8. How did you feel when you became world champions?

T: I was so happy we repeated our championship!

Q9. Is there anything that changed for you after becoming world champions?

S: Nothing has really changed, but I would like to make movement toward holding the AP Division in Japan [Translator’s note: we think he means at Japan Nationals].

Q10. How do you feel going into this year’s World Yo-Yo Contest?

T: We will definitely win for the third consecutive time! We hope that we will be able to pull off a performance that will make you think “It’s just like SPINATION [to do something like this]!” Please cheer for us!!

T: It wouldn’t be an exaggeration to say that it’s my “Partner in life.” Haha…
It is also like a part of my body, as well as the thing that gave me infinite possibilities of expressing myself.

S: It is one aspect of my own possibilities.

Many thanks to TOMMY and SOUL of SPINATION! We wish them the best of luck at WYYC2015.